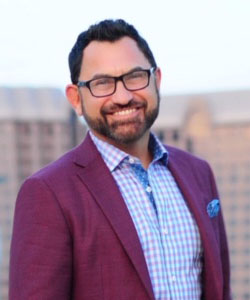 President of RC Public Relations, LLC and Sales Representative for Vikor Scientific, Raul Cantu, a native Texan moved to Richmond in 1991. He founded Nacho Mama’s Inc., an award-winning and popular restaurant in Carytown that became a Richmond staple for 22 years. Raul has been a serial entrepreneur for many years in opening multiple successful businesses, including Nacho Mama’s Bar & Grill, Adonis Clothing for Men, Aphrodite Clothing for Women, Capital City Market/Nacho Mama’s Express, Swanlake Investments, Galaxy Diner, Eventfully Yours Catering and Special Events, and Now RC Public Relations, while being successful in the Microbiology PCR Industry with Vikor Scientific, and investing in real estate in our community.

Raul has always been a giver, he enjoys giving back to the Richmond community and has supported the LGBTQ community, and many other nonprofits for over 23 years. He served as President for the Carytown Merchants Association for over 7 years and helped bring a great deal of awareness and traffic during his tenure as president utilizing his public relations and marketing skills. Raul co-created the Carytown Restaurant Week, benefiting Richmond Public Schools, raising several thousand of dollars for their project needs. He has been selected as 40 over 40 by Style Magazine and has been featured in The Richmond Times Dispatch-Metro Business Section many times, one story being Journey to Success. Raul was appointed to the Small Business Advisory Board by Governor Gilmore in 1998 and in 2017 was honored by receiving a Humanitarian Award.