Dazzling and Tremendous by Everett Hoffman/Queer Dimensionalities by Nick Simko 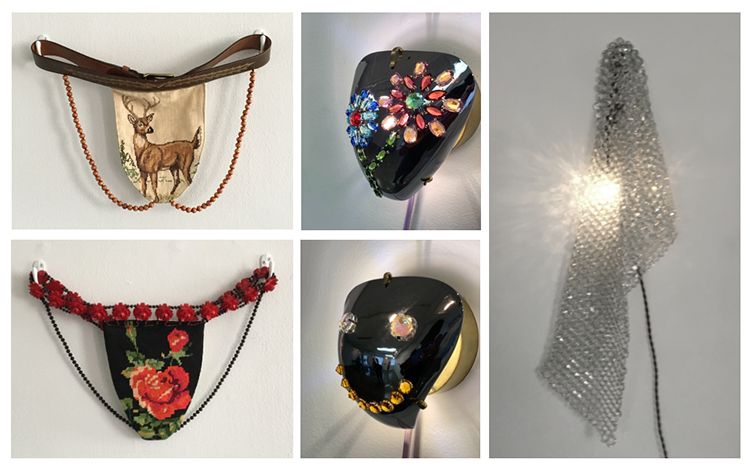 The Iridian Gallery at Diversity Richmond is pleased to present concurrent solo shows featuring the work of two talented queer artists for our first post-quarantine exhibition. 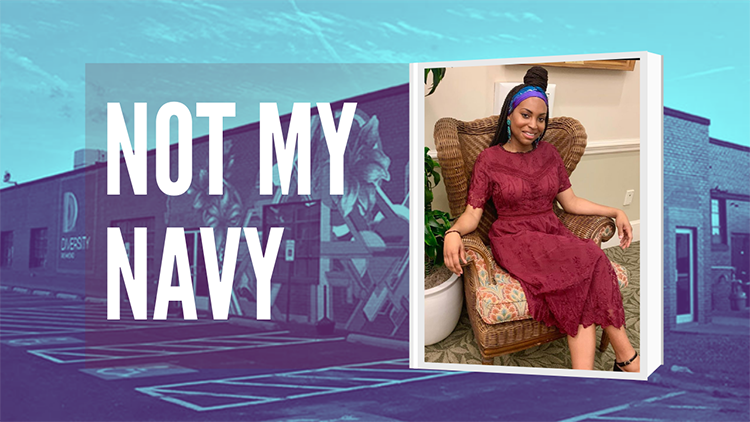 This Queer Intersections episode features Anah Johnson who came to Richmond after years of serving in the Navy and living abroad in Europe. Anah is an Afro-Indigenous Trans Two-Spirited woman. She shares her experiences in the military as she navigated the growth of her identities in an oppressive environment. Anah is a trailblazer and has persevered through many obstacles to find joy in the world around her. 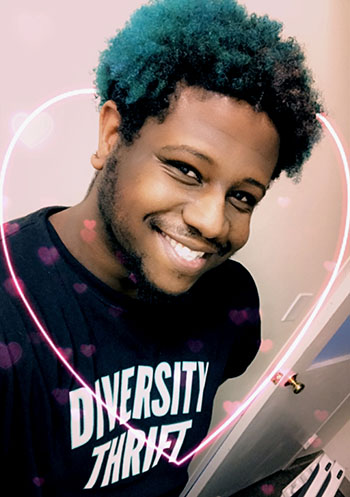 Working at Diversity Richmond has given me the opportunity to give back to communities that need it the most, which has always been very important to me. As a queer Black person who has experienced homelessness and food insecurity, working in an environment with other LGBT+ people and getting involved in the community has been a dream.

Most recently, the food drive we held for Viva! RVA was a spectacular way to show our support for communities hit hard by COVID-19. Seeing the smiling faces of thankful people as they received their food was incredible and I’m really happy to have been a part of it. It’s a lot of hard work and long hours working in the event hall, but getting to meet more people working in Richmond’s non-profit community and helping to supply the needs for low-income families/individuals is definitely worth it. I can’t wait to see what Diversity does for other communities in Richmond in the near future. I’ll definitely be lending a hand. 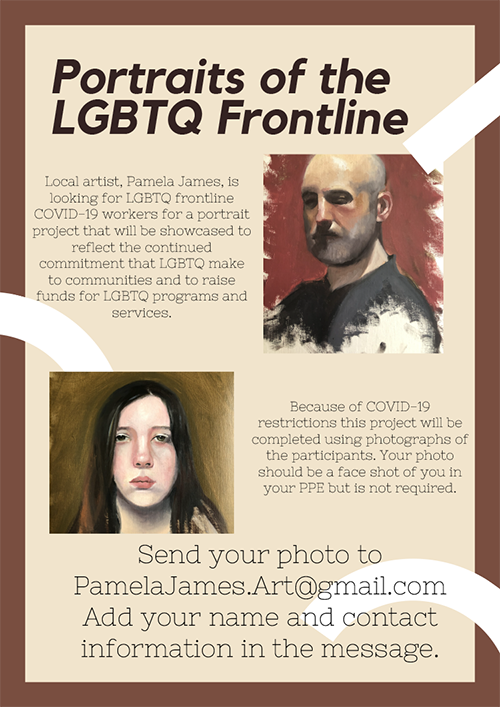 Send a face shot of yourself in PPE if possible to . Please include your name and contact information. 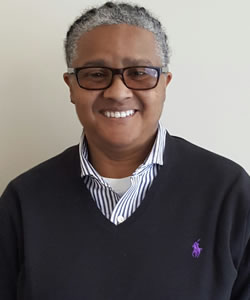 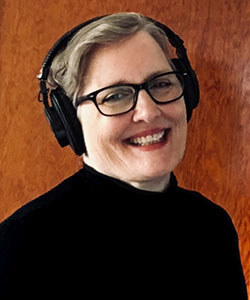 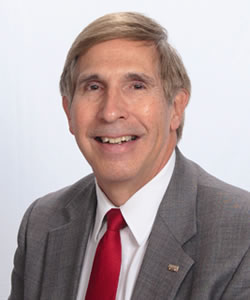 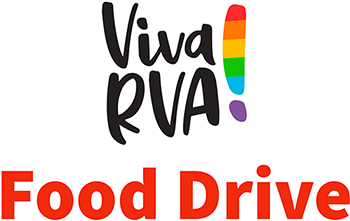 Goal is to help 500 families

The Hispanic community has been extremely hard-hit by the pandemic. The hospitality industry is but one example with servers, housekeeping staff, maintenance workers, dishwashers, chefs, bartenders and cooks losing their jobs. Landscaping businesses are another example as many companies can no longer afford those services. Also, many Hispanic children normally receive breakfast and lunch through public school programs, which, at the moment, do not exist. In addition, Hispanics/Latinos of low socioeconomic status may be less likely to seek testing if they are uninsured or lack access to paid sick leave.

In response to this crisis, we are sponsoring Viva RVA Food Drive. Our community partner, Diaz Foods, is selling us several pallets of food at cost. Add that to the $2,500 that we have raised and we can provide a week’s groceries to 200 local families. Our goal is 500.

You may remember last summer’s, Hispanic Music Festival coordinated by volunteer Fernando Rodriquez. The festival was our first major attempt to better connect with our local Hispanic communities. With the festival not being held this year, we searched for another way to bridge the gaps between Diversity Richmond and local Latinx people.
“We grab every chance we can to help and no better example than our food drive,” said Executive Director, Bill Harrison. “The thought of anyone, much less a child, going to bed hungry is not acceptable.”

Harrison added that funds from the Laughing Gull Foundation are supporting the drive. Laughing Gull provided a three-year grant in 2018 to fund work addressing racial equity and inclusion. The money has been used in support of the organization’s annual event, “Black and Bold,” when local Black LGBTQ leadership is recognized. It also sponsored last year’s Hispanic Music Festival. Richmond’s Genesis Consulting is also donating $1,000.

Can you help? Monetary donations maybe made on-line at www.DiversityRichmond.org or by mailing a check to 1407 Sherwood Avenue, 23220. We also need volunteers to bag the groceries and help share them with recipients. For more information, contact Raul Cantu at 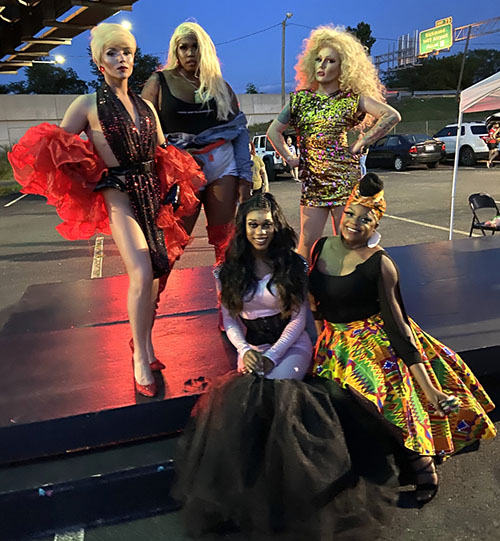 When Diversity Richmond board member, Michael-Birch Pierce approached us with the idea of a drive -in drag show, we got excited, but we really had no idea what a hit the shows would be. Every production thus far has been a sellout.

Attendees pay $10.00 to reserve a parking space in the Diversity parking lot. Folks bring their own food and beverages or support one of the food trucks on the premises. Then they sit back and enjoy the talents and antics of a number of performers who do not allow the pandemic to in any way, quell their enthusiasm for being on stage.

Diversity Richmond host the shows for several reasons according to the organization’s Event Coordinator, Raul Cantu. “The shows give people an enjoyable, safe environment to have fun. It is also a way to help support our entertainers whose employment has been drastically impacted by the pandemic.”

Cantu shared that the shows have averaged about $1,500 in gratuities which are divided by the performers. “The shows are also well received as attendees not only have a great time; they love supporting the performers.”

The reviews have all been positive. “It is so nice to forget all the craziness for just a little bit and enjoy the show with a socially distanced crowd. We will 100% be back!” shared Heather Clarke of The Hive Weddings.

The performances have become so popular that Pierce and Cantu are now booking two shows per night. The next shows are Sunday, July 26th at 6:00 and 8:00 P.M. See the graphic below for details. Please email Raul with questions at

Photo: Just a few of the entertainers who have performed at our Drive-In Drag Shows

Quan McLaurin resigned from his position as the Director of Diversity Retention at Liberty University in Lynchburg, Virginia. In his public resignation letter he shared: "It is morally unconscionable for me, as Director of Diversity Retention, to ask students of color to stay at a university and within a space that not only does not value their well-being and lives, but actually perpetuates very real and damaging racial trauma against trauma, and then 'gaslights' and silences them by grossly appropriating scripture."

This episode focuses on Quan's experiences as a student and staff member at Liberty, his work to create affirming spaces for Black and LGBTQ+ students, and the LU Underground Railroad which raises money for employees of color who want to leave but can't afford to.
Support Quan's efforts here. 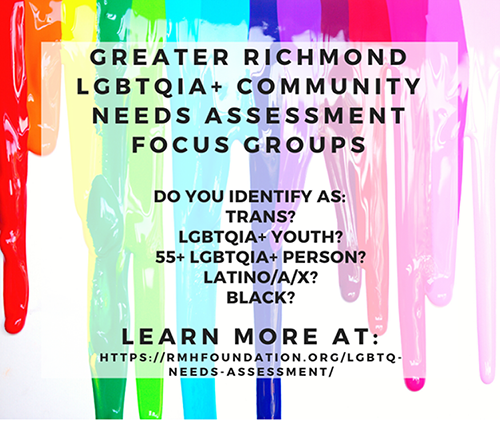 Are you and LGBTQ+ person 18 or older living in the greater Richmond area?

Be part of a focus group of Latinx, African American, older (55+), youth, or transgender members of the LGBTQIA+ community in the Richmond area. In this study, you will go to a group meeting, lasting about one hour. In the meeting, you will be in a group with 5 to 12 other members of the LGBTQ+ community. You will be asked to talk about things like experiences in the community, the kinds of support that you receive, needs that you see for LGBTQIA+ community and places where you feel safe. For more information on how to participate here. 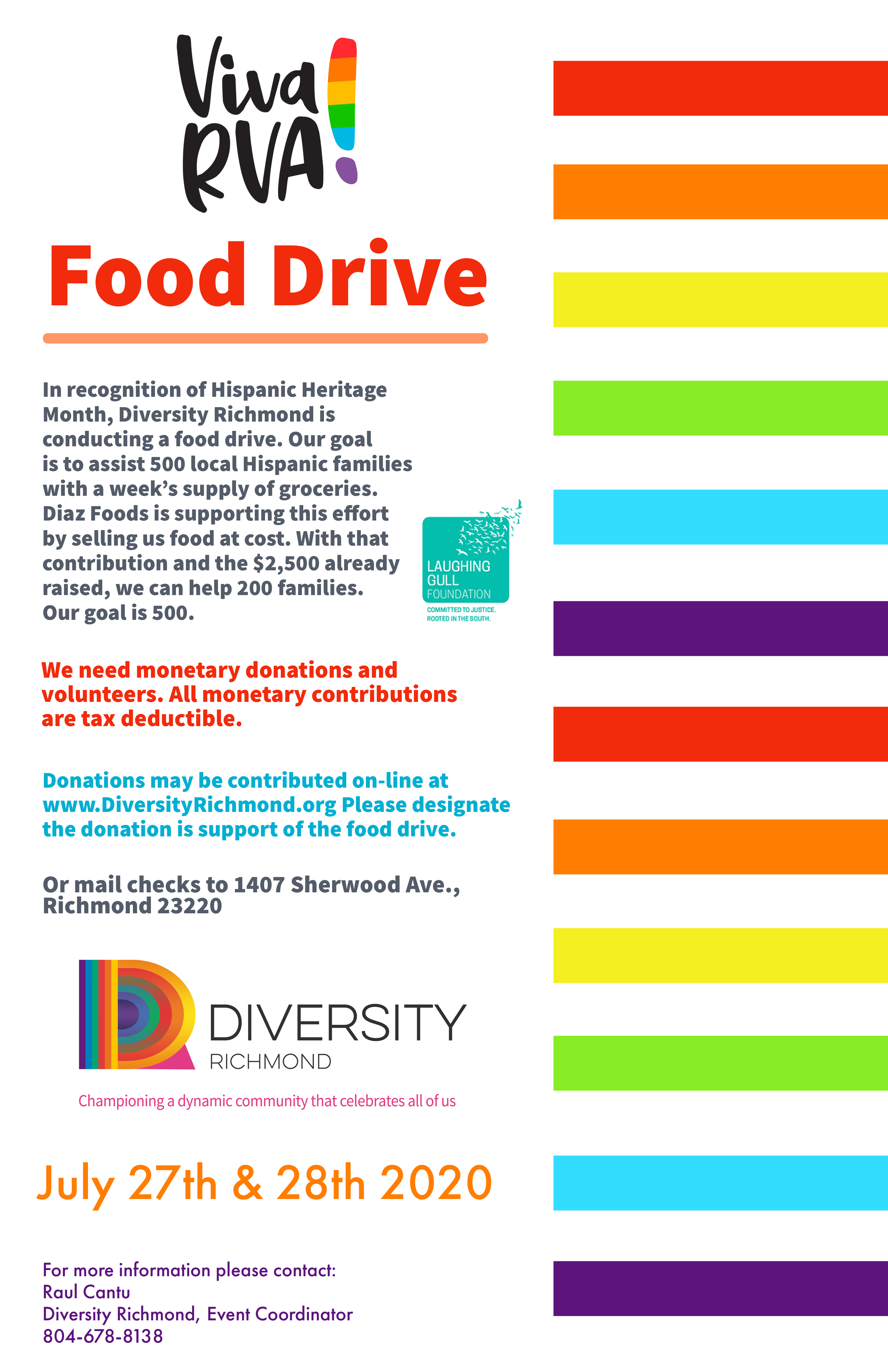 In recognition of Hispanic Heritage Month, Diversity Richmond is conducting a food drive. Our goal is to assist 500 local Hispanic families with a week's supply of groceries. Diaz Foods is supporting this effort by selling us food at cost. With that contribution and the $2.500 already raised, we can help 200 families. Our goal is 500. 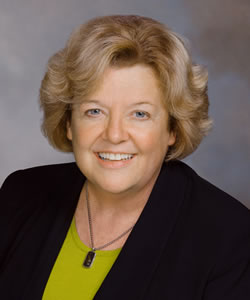 The past month has been such an emotional rollercoaster. The heartbreaking tragedy of seeing George Floyd murdered, and adding his name to the list of people including Breonna Tayler, Ahmaud Arbery, Trayvon Martin and too many more who have cruelly and senselessly lost their lives to hate. Yet walking side-by-side with protestors in our city I have also felt exhilaration and hope that we would collectively acknowledge and work to change the systemic and institutional racism that pervades our city, state and nation today. What I have learned from many years fighting for equality and justice is that it will take continued effort from all of us to sustain the momentum and realize the sea change that has begun. Diversity Richmond can and must be part of this effort to eliminate racism and marginalization.” 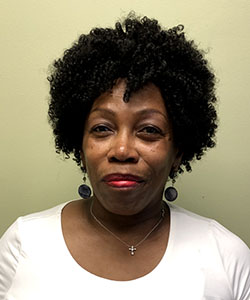 Most people say that they can’t wait for things to get back to normal. As for me, I don’t want some things to go back to normal. If some people think police brutality and killing Black men and woman is normal, then something is wrong with that normal.

If you think normal is killing LGBTQ people and we hear on the news that a gay man or transgender person is found dead because of who they are, is normal, then something is wrong with that normal.

If you think refusing to unveil our 44th President Barack Obama’s portrait in the White House, then something is damn wrong with that normal.

I say, we are looking for equality, not revenge. No matter how educated or rich you are, how you treat people ultimately tells all. I CAN’T BREATHE! Amazing! Ava can breathe now! I’m speaking the truth!