“Because, despite everything, you haven’t lost your hunger…” -- Diana Khoi Nguyen 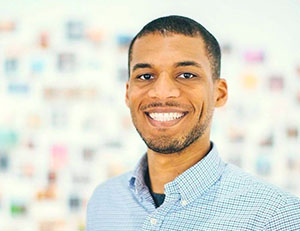 Evan comes to Diversity Richmond after four years in Lynchburg where he worked at the Academy Center of the Arts. A Richmond native, Evan is happy to be back home. “I’ve missed family and friends that I haven’t been able to see as much over the years. Seeing my dad multiple times a week is the best thing I could ask for. A part of me feels whole again.”

While in Lynchburg, Evan was part of a talented team responsible for restoring, reopening, and racially integrating an 835-seat historic theater that had not been in operation since 1958. The process was years in the making and continues today to ensure that the entire community feels welcomed and served. “Integrating spaces is more than one moment or law. Building trust with communities takes generations, so it’s essential to understand that there is always work to be done and the process never ends.”

Evan remembers the stories he’s heard and the ones he’s experienced: his father recalls the racism he experienced by having rocks thrown at him on his way to school, and Evan will never forget existing alongside white supremacists in Charlottesville. “The past and present drive me to move forward. I yearn for growth, safety, and change. We deserve that, and I’m thankful to have the ability to do something about it.”

He has been shaped by many of his life experiences which have led him to Diversity Richmond. While working at the National Urban League Washington Bureau, he was present outside of the Supreme Court for the 2015 marriage equality decision. He met Dr. Maya Angelou in college, and he attended an Afrikana Film Festival event featuring Dr. Angela Davis at the VMFA. “I try to use these moments as motivation to keep pushing forward when I’m exhausted. If Dr. Davis can still find time to smile, I guess I can too.”

At Diversity Richmond, Evan hopes to reclaim the words diversity, equality, and equity to mean something more than the co-opted buzzwords they’ve become. “I live with an appreciation for the versions of ourselves that never felt safe to exist, and I hope my work will allow more people to exist authentically. He wants people to feel seen and heard by ensuring that tangible action is prioritized, not platitudes.

“We are very pleased that Evan decided to join our team,” shared Diversity Executive Director, Bill Harrison. “Evan will take our outreach programs to the next level. While we have accomplished much, we have much work to do and he is the ideal person to lead our efforts.”

“If you have come here to help me you are wasting your time, but if you have come because your liberation is bound up with mine, then let us work together.” --Lilla Watson