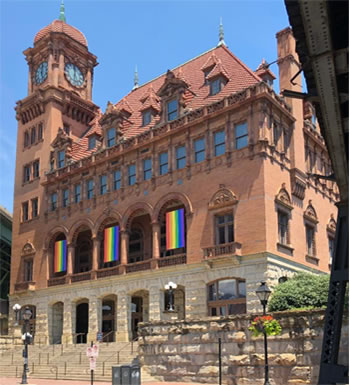 Three big beautiful rainbow banners were mounted on the historic Main Street Train Station over the weekend in recognition of Pride Month. While most cities recognize June as Pride Month, Richmond also celebrates during September.

The banners were made possible through the efforts of Richmond Mayor Levar Stoney. The Mayor recently visited another city and saw how supportive they were of LGBT Pride and felt Richmond should be more visible in its support. He also plans conversations to discuss celebrating in September.

If you would like to thank Mayor Stoney, email Laura Harrison at his office. Ms. Harrison will ensure he receives your message.