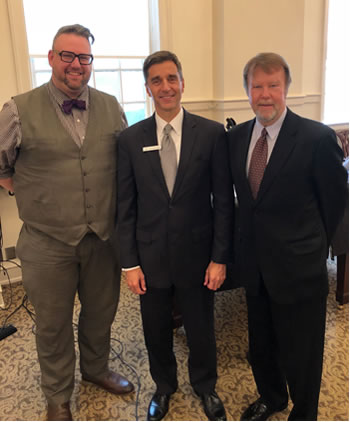 When we received the invitation from a pastor at Richmond’s First Baptist Church to participate in a congregational conversation about the LGBT community, he reassured us that it was in attempt “to have an honest dialogue”….for us not to fear because the invitation was coming from a Baptist Church.

The hour and a half discussion addressed many issues and was well received by the group of about 50 church members. “As I entered the room, I was met by a woman who confided that her child was gay and would not attend church because they had been told that God did not love them. This was causing her obvious pain,” shared Bill Harrison.

“It was emotional at times for all four of the panelists, I think. We each shared our own hurts, victories and those of our LGBT brothers and sisters. If someone has issues with our community it is usually based on religion and discussing those topics in a safe environment is when understanding takes place.”

It was a good day. While we were probably “preaching to the choir” as the majority were vocally understanding and supportive, hearts were touched, and stronger bonds were formed.

“What else can we do?” was asked by several members. “Where do we go from here?” Yes, it was a good day to be in church.