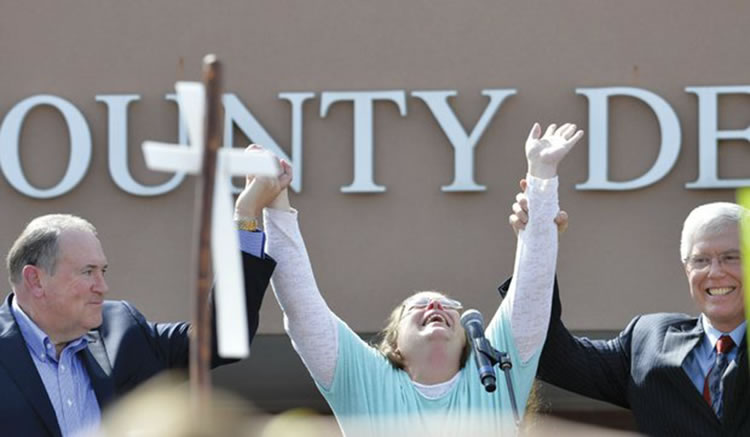 Kim Davis is neither a hero nor a martyr in our book.

Her actions defying a federal court order were both imprudent and ill-advised, despite her claims that “God’s moral law conflicts with (her) job duties” as a public servant in Rowan County, Ky., population 23,600.

Ms. Davis puts us in the mind of the Massive Resistance racists in Virginia who, like Ms. Davis, held elective offices and led the effort to shut down public schools in localities across the state rather than comply with the U.S. Supreme Court’s order in 1954 to desegregate public schools.

Their stubborn and blind allegiance to hatred caused many schoolchildren — African-American and white — to suffer without an education. More than 50 years later, Virginia and her people are still paying the price in many ways.

Like those haters, Ms. Davis refused to issue marriage licenses to anybody in Rowan County rather than provide them to gay and lesbian couples.

So when Ms. Davis’ supporters, including Republican presidential candidates Mike Huckabee, a former Arkansas governor, and U.S. Sen. Ted Cruz of Texas, equate her civil disobedience to that of the late civil rights leader Dr. Martin Luther King Jr., we are highly insulted.

Dr. King, a highly educated man and Baptist minister, fought for equal rights and equal opportunity for all people.

Ms. Davis, a three-time divorceé who became an Apostolic Christian four and a half years ago after her claim of a religious epiphany, is fighting for her “right” to discriminate. What possibly is “Christian” or religious about that?

Instead, she has turned her office into a personal pulpit to bully the citizens of Rowan County, while whipping up a national frenzy of anti-gay sentiment and turning her situation into a political madhouse.

Ms. Davis, 49, has been the clerk of Rowan County since January. Her mother was county clerk for 37 years, with Ms. Davis serving as her deputy for 26 years. To continue the legacy, Ms. Davis’ son, Nathan, is now one of her deputies.

That may be part of the problem, one found in rural courthouses and clerks offices across the nation — that those who hold office, or work in an office for a long time, believe they can make the law rather than follow it.

Whatever Ms. Davis’ religious beliefs or cultural attitudes, we call on her to end this religious charade and step down. The Rowan County Clerk’s Office then can comply without question or uncertainty to the federal court order to issue marriage licenses to all couples. Then same-sex couples can enjoy the same right to a legally recognized marriage that Ms. Davis has enjoyed four times now.

Thank you for the editorial, “No hero,” in reference to Kim Davis, the clerk of Rowan, Ky., who refuses to issue marriage licenses to same-sex couples because of her religious convictions.

While some have compared to her to Rosa Parks and Dr. Martin Luther King Jr., we found those connections insulting and based on total ignorance.

Ironically, in the midst of this controversy, we partnered with the Virginia Historical Society for the airing of “Brother Outsider,” a documentary about the life of Bayard Rustin, the openly gay friend and adviser to Dr. King. During his prolific civil rights crusade, in 1956, Mr. Rustin was a main consultant to Dr. King regarding the public transportation boycott in Montgomery, Ala. He also was a founder of the Southern Christian Leadership Conference and a chief organizer of the 1963 March on Washington.

In Kentucky, history is repeating itself. This is the same type of resistance that many used to deny the rights of African-Americans following the passage of the Civil Rights Act of 1964. Many used and still use their Bibles as a means to justify racial discrimination.

Ms. Davis can preach in the streets that homosexuals are going to hell and I will be the first to defend her right to do so. But Ms. Davis is an elected official. To try and use her faith as a means to discriminate is absolutely wrong.

Thank you, Richmond Free Press, for once again speaking out against injustice.

The writer is president and executive director of Diversity Richmond.